UCSB’s experiment, from the Luzzatto-Fegiz Laboratory, has been included in the first 8k video filmed in space, which showcases the broad range of research aboard the ISS. The experiment appears around the 1:30 mark. Below you can find a video and the full article from NASA or check out the NASA website: https://www.nasa.gov/8k-science.

Science gets scaled up with the first 8K ultra high definition (UHD) video from the International Space Station. Get closer to the in-space experience and see how the international partnership-powered human spaceflight is improving lives on Earth, while enabling humanity to explore the universe.
Credits: NASA
Fans of science in space now can experience fast-moving footage in even higher definition as NASA and ESA (European Space Agency) deliver the first 8K ultra high definition (UHD) video of astronauts living, working and conducting research from the International Space Station. The same engineers who sent high-definition (HD) cameras, 3D cameras, and a camera capable of recording 4K footage to the space station now have delivered a new camera capable of recording images with four times the resolution than previously offered.
The Helium 8K camera by RED, a digital cinema company, is capable of shooting at resolutions ranging from conventional HDTV up to 8K, specifically 8192 x 4320 pixels. By comparison, the average HD consumer television displays up to 1920 x 1080 pixels of resolution, and digital cinemas typically project in resolutions of 2K to 4K.
“This new footage showcases the story of human spaceflight in more vivid detail than ever before,” said Dylan Mathis, communications manager for the International Space Station Program at NASA’s Johnson Space Center in Houston. “The world of camera technology continues to progress, and seeing our planet in high fidelity is always welcome. We're excited to see what imagery comes down in the future.”
Viewers can watch as crew members advance DNA sequencing in space with the BEST investigation, study dynamic forces between sediment particles with BCAT-CS, learn about genetic differences in space-grown and Earth-grown plants with Plant Habitat-1, observe low-speed water jets to improve combustion processes within engines with Atomization; and explore station facilities such as the MELFI, the Plant Habitat, the Life Support Rack, the JEM Airlock and the Canadarm2.
While the 4K camera brought beautiful footage of fluid behavior in the space station’s microgravity environment to the world, the new 8K video takes viewers through a variety of experiments and facilities aboard the orbiting outpost, which on Friday, Nov. 2 will celebrate the 18th anniversary of humans living continuously aboard and the 20th anniversary of the launch of the first two space station elements on Nov. 20 and Dec. 4, 1998, respectively.
Delivered to the station in April aboard the 14th SpaceX cargo resupply mission through a Space Act Agreement between NASA and RED, this camera’s ability to record twice the pixels and at resolutions four times higher than the 4K camera brings science in orbit into the homes, laboratories and classrooms of everyone on Earth.
“We’re excited to embrace new technology that improves our ability to engage our audiences in space station research,” said David Brady, assistant program scientist for the International Space Station Program Science Office at Johnson. “Each improvement in imagery fidelity brings that person on Earth closer to the in-space experience, allowing them to see what human spaceflight is doing to improve their life, as well as enable humanity to explore the universe.”
The RED camera is the same brand used to record theatrical releases such as The Hobbit trilogy, Guardians of the Galaxy Volume 2, and television programs such as, Stranger Things, Maniac, and Lost in Space. 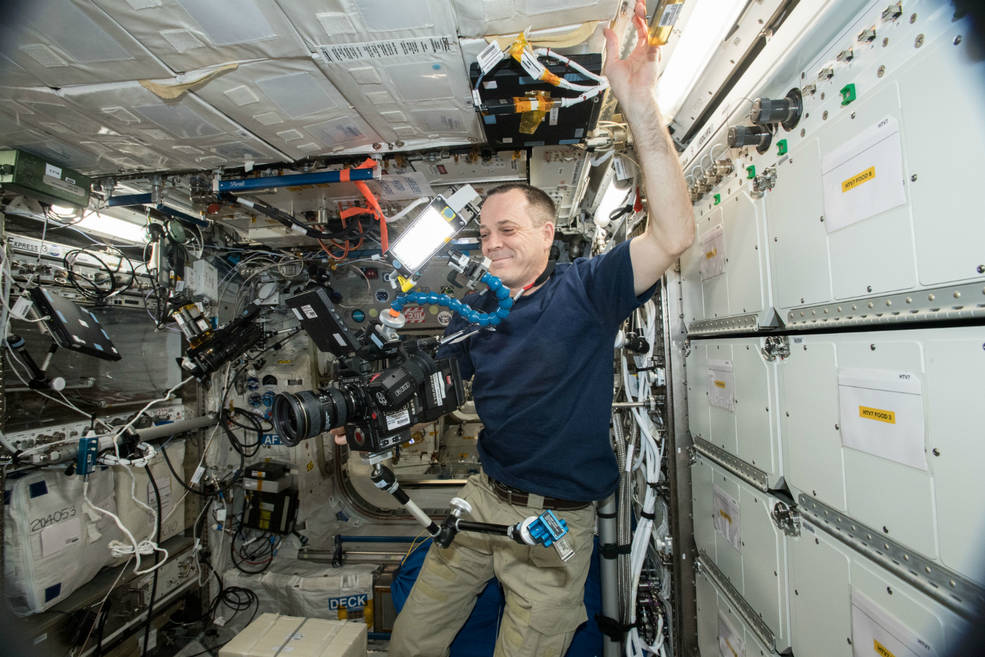 NASA astronaut Ricky Arnold does some filming on the International Space Station Oct. 3, 3018, with a Helium 8K camera, made by the digital cinema company RED.
Credits: NASA
Download full-resolution image.
Viewers can watch high-resolution footage from inside and outside the orbiting laboratory right on their computer screens. A screen capable of displaying 8K resolution is required for the full effect, but the imagery is shot at a higher fidelity and then down-converted, which results in higher-quality playback, even for viewers who do not have an 8K screen.
Download the video in full resolution at:
https://images.nasa.gov/details-First-8K-Video-from-Space.html
In addition to the new 8K video, NASA astronauts Andrew Feustel and Ricky Arnold and Russian space agency Roscosmos cosmonaut Oleg Artemyev recently took new images of the world’s unique orbital laboratory as they departed at the conclusion of their mission. The photos are available at:
https://flic.kr/s/aHsmuLTSzb
-end-