A transit pod prototype designed and built by a team of student engineers from the University of California, Santa Barbara (UCSB) demonstrated the potential for active magnetic levitation during the second round Hyperloop competition last weekend.

The California Chamber of Commerce is among the supporters of the UCSB Hyperloop II team, which was among 25 chosen from 150 contenders for a spot at Hyperloop Competition II. The competition was sponsored by SpaceX, which built the test track, about 1 mile long and 6 feet in diameter, outside its headquarters in Hawthorne, California. 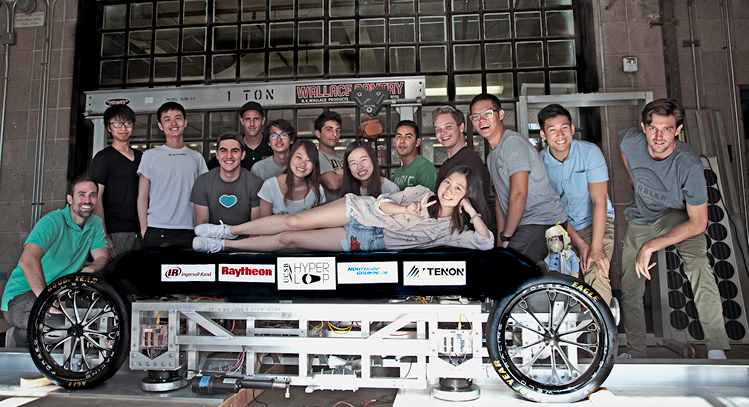 Members of the UC Santa Barbara Hyperloop II team pose with the prototype of their pod, which relies on active magnetic levitation to remove friction that would impede speed (the levitation engines are located above the metal cylinders just inside the 22” drag racing wheels). The team leader is Benjamin Flores (standing, fifth from right), an engineering student in his junior year. Kneeling at left is faculty adviser Tyler Susko, Ph.D., lecturer in the UCSB Mechanical Engineering Department.

Hyperloop II team member Brian Canty, an electrical engineer pursuing his master’s at UCSB, explains: “The idea behind Hyperloop is that by removing friction and drag, you can get a vehicle to move very efficiently at high speeds. By placing the vehicle in a vacuum tube, drag from contact with air is severely reduced. To mitigate friction, the vehicle levitates above the ground.”

The several approaches to get a pod to levitate, Canty says, include “passive/active magnets and air bearings (think a puck sliding over the top of an air hockey table).”

During competition weekend, the UCSB team showed SpaceX an in-place levitation, says team leader Benjamin Flores, a junior engineering major. The team pod was one of a very few that were able to levitate in place, Flores notes.

“Our major design goals were to create the fastest vehicle we could while also testing out the efficiency of the magnetic engines,” writes Canty. While levitation could make the pod more efficient, it “comes at the cost of requiring heavy batteries to power the engines,” says Canty. “We are close to determining if it makes sense to keep the engines, or if it is more efficient to switch to nonrotating ‘passive’ magnets.”

Because using active magnetic levitation remains a theory still being tested, the project has been “exciting,” Canty writes. “We are truly pioneering in this field of transportation.”

“The biggest challenge we faced on the pod was making sure everything would work around those crazy powerful magnets,” says Canty. “We used special cabling that reduced magnetic interference and had to iterate all our circuits until they were protected from the magnetic radiation. In the end, we got them to work even in the noisy environment, which was incredibly rewarding.”

Heat in a Vacuum

Another big challenge for the UCSB Hyperloop team was what the engineering overview described as “the staggering thermal implications of working in a near-vacuum environment.”As the overview pointed out, “Without air to dissipate heat, components will begin to heat up much faster.”The subgroup of the team focusing on this challenge worked to ensure the extra heat was within acceptable parameters, and if it wasn’t, “designed efficient methods for sinking the heat to ensure everything would function.”

The broad scope of developing the pod required an interdisciplinary team with electrical, computer and mechanical engineers collaborating. The more than 20 members on the team divided further into six task forces that focused on different aspects of the pod, such as design of the structure, magnetic levitation, power distribution, sensors and controls, braking and thermal.

“To efficiently interface, we ran our team like a small company where each team had a team leader that kept the rest of the team updated,” Canty says. “This structure was very efficient at allowing people to get their work done without having to worry too much about logistics.”

Continuity is a continuing challenge for the UCSB team. Many members sign on as part of the UCSB Engineering Capstone Program, a project-based course offered to fourth-year engineering students—who then graduate and move on to other opportunities.

Documenting design decisions can help with transitions, but as Canty points out, “When you’re on such a short deadline, it’s difficult to get the work done at all, let alone document it. In the future, I can see UCSB Hyperloop becoming a campus club with members of all ages, not just seniors.” Interesting subjects for future Hyperloop team members, Canty suggests, include testing batteries in a vacuum and collecting data about magnetic levitation.

Just three teams were chosen to run their prototypes through the SpaceX tube on August 27 based on criteria that included tests to ensure the vehicles could run the test track with some guarantee of safe performance. Time constraints also limited the number of pods that could be run through the tube, which reportedly took 30 to 45 minutes to depressurize and repressurize.

Says Flores, “Sadly we were unable to see what speed we can reach because we didn’t get on the tube, but if we did we might have reached over 150 mph.” First place in the competition went to WARR Hyperloop, a team from the Technical University of Munich. The WARR pod reached a speed of more than 200 mph. The pod had wheels and has been described as a fancy version of an electric car. Website Tech Crunch reported the WARR pod was built of a carbon fiber and attributed the win to the pod’s electric motor and lightweight 176-pound frame.

Musk said SpaceX would host the Hyperloop competition again next year.“It was a great learning experience at SpaceX,” says Flores, citing lessons from other pods. “We are excited for Competition III.”

For more information about the UCSB Hyperloop program, visit www.ucsbhyperloop.com.