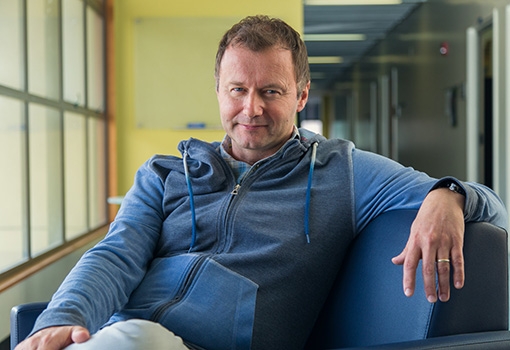 Igor Mezić, professor in the Department of Mechanical Engineering and the Department of Mathematics at UC Santa Barbara, has been named the recipient of the biennial Society for Industrial and Applied Mathematics (SIAM) Activity Group on Dynamical Systems (SIAG/DS) J. D. Crawford Prize, established in 2000.

The Crawford Prize recognizes contributions from a paper addressing fundamental issues in the dynamical-systems field. Mezić’s single-author paper, titled “Spectrum of the Koopman Operator, Spectral Expansions in Functional Spaces, and State-Space Geometry,” published in the journal Nonlinear Science in 2019, presented a mathematical theory that made it easier to understand and speed up an array of previously unsolvable computations in a wide range of applications, including fluid dynamics, energy-efficient design, network security and operations, and complex systems dynamics.

“We offer our congratulations to Igor Mezić for the tremendous recognition and prestige that come with the Crawford Prize,” said Rod Alferness, dean of the UCSB College of Engineering (CoE). “SIAM is a top professional group in the world for dynamical systems research. It is exciting to see Igor receive this award for his innovative work, which has pushed Koopman operator theory forward and broadened its use in applications ranging from power-grid operations to neuroscience.”

“It’s wonderful to me that the dynamical systems community deems my work worthy of the Crawford Prize,” said Mezić, who is also director of UCSB’s Center for Energy Efficient Design and head of the Buildings and Design Solutions Group at the CoE’s Institute for Energy Efficiency. “The depth and breadth of dynamical systems research is immense, and much of it is of top technical quality and has broad impact in engineering and the sciences. The value of the prize is heightened for me just by the sheer quality and volume of the competition for it.”

The award’s namesake, John David Crawford, who died in 1997, conducted groundbreaking research in which he recognized the inherently chaotic dynamics that occur inside plasma and cause particles to escape whatever mechanism is used to contain them. Mezić offers a user-friendly allusion to the chaos theory inherent in Crawford’s findings, recalling Jeff Goldblum’s character in the film Jurassic Park, who said, prophetically, “Life will not be contained. Life breaks free.“

Crawford made seminal contributions to using geometric data-science tools to model chaotic systems, Mezić says, adding, “Those tools provide precise answers in systems that have relatively few dimensions, but a system having more than three dimensions, such as an automobile, which might get a hundred pieces of data from a range of dynamic systems indicating gearbox status, speed, torque, etc., is very hard to represent geometrically.”

Mezić realized that a different mathematical framework was needed to model such complex systems. He began working on the problem for his PhD dissertation, which he received 1994, by incorporating Kooopman operator theory, which had been developed in the 1930s but was never used on a large scale because the geometric point of view was so popular. Mezić, however, realized that it could be useful.

“I wanted to preserve the power to describe geometrical objects — because humans think geometrically — but work it so that you could understand a dynamical system that has many dimensions,” he says. “I’ve ported geometric concepts of dynamical systems into an operator theoretical context so that they can be turned into algorithms, artificial intelligence, etc. It is adding to geometry that Crawford utilized by setting them up in a different, more easily utilized domain.”

Whereas a car has a hundred or a thousand dimensions to its dynamical system, artificial intelligence and deep-learning systems have hundreds of thousands or even millions of dimensions. Mezić’s theory not only has the mathematical power to resolve such complex systems, but also avoids abstraction, he says, so that “It is very cleanly and clearly understandable what the objects are.”

He notes that the most important contribution of his work on Koopman operator theory is that it “basically opens your mind to be able to think in larger dimensions using intuition from lower dimensions. I often think about the fact that there are elements of applied math and engineering that are highly conceptual, and if you are very good technically — and you need to be — you can manipulate symbols and get a result.” But Mezić has always been interested in using math to distill the concepts beyond abstract symbols and equations.

His theory did not come into immediate use. He gave a plenary session talk on it at the SIAM meeting in Snowbird, Utah, in 2009. But, as he explained, people have a finite amount of time to dig into complex new tools and tend not to do so until they encounter a problem where the tool might be useful, at which point they commit the time to understanding it.

A decade after Mezić’s plenary talk, use of the theory has snowballed, he says, after application in such areas as fluid mechanics, power grid operations, and energy efficiency in buildings, soft robotics, and neuroscience demonstrated that, as he says, “It can be effectively applied to say something useful to society.”

“The thing that excites me most about Dr. Mezić’s work is the emerging ability it provides to tackle perennially difficult technical challenges,” said Dr. Matthew Munson, program manager for fluid dynamics at the DEVCOM ARL Army Research Office. “The future army will operate in an environment that is hugely complex and uncertain, which requires the ability to solve hard problems quickly. The theoretical frameworks and computational tools that he and his team have developed, along with his continuing discoveries, are poised to make a major impact on how the army solves these future challenges.

“This new approach will change the world," Munson said. "In the future, I think it will be the standard theory used for analysis and prediction of many dynamic systems. The potential applications are numerous, and the potential impacts are enormous.”

Mezić has previously won numerous prizes for his research, among them the Alfred P. Sloan Fellowship in Mathematics, a National Science Foundation CAREER Award, and the George S. Axelby Outstanding Paper Award on "Control of Mixing" from IEEE.  He also won the United Technologies Senior Vice President for Science and Technology Special Achievement Prize in 2007 for his contribution to a variety of engineering technologies.