The College of Engineering extends congratulations to Igor Mezić, professor in the Department of Mechanical Engineering, for receiving a major research award and a fellowship from the Society for Industrial and Applied Mathematics in recognition of his long-term contributions to applied mathematics.

Mezić and colleagues at Cal Tech, MIT, the University of Washington, and the University of Michigan have received a 2017 Department of Defense Multiple University Research Initiative (MURI) Award in the form of a five-year, $6.5 million grant for their proposal titled “From Data‐Driven Operator Theoretic Schemes to Prediction, Inference and Control of Systems (From DDOTS to PICS).”

"At the College of Engineering, we pride ourselves on making scientific contributions that improve the world,” said Dean Rod Alferness. “As a widely recognized mechanical engineer and applied mathematician, Igor Mezić fits squarely into that vision. On behalf of the entire college, I congratulate Igor on this prestigious and well-deserved fellowship from the Society for Industrial and Applied Mathematics, and for being awarded a major DoD grant that will enable him to continue his contributions in a new realm of revolutionary technology.”

To appreciate the objectives of the MURI award, it is helpful to examine the achievements that led to another award: Mezić is also being honored with a 2017 Society for Industrial and Applied Mathematics (SIAM) Fellowship for his major contributions to the field.

SIAM, which recognized 28 of its 14,000 members this year, highlighted Mezić for “sustained innovation at the dynamical systems theory/applications interface; notably for advances in the use of Koopman Operator Theory,” according to the society’s website.

Mezić described the applications of Koopman Operator Theory to data analysis as relating to “how you organize your data and how you arrange it and think about it to get the meaning out of it. The data might be extremely messy so that it gives you just a few numbers that are particularly relevant to understanding the evolution of a system’s dynamics.” He develops algorithms that can “extract patterns that may be hidden in some way.”

Mezić, who is director of UCSB’s Center for Energy-Efficient Design and head of the Buildings and Design Solutions Group for the UCSB Institute for Energy Efficiency, does much of his work under the umbrella of what he calls “big data dynamics.”

In smart buildings, an area where he has worked extensively, Mezić explained that while a building engineer might analyze big data from a building to find a “static” relationship between, say, humidity and energy use, “I might ask, How will a change in humidity at this point in time affect energy use over the next five hours? To me, the static relationships are the consequence of the dynamics, rather than the primary way I analyze things. I use the data to analyze and understand the properties of large, data-intensive systems in order to design and control them better.”

Historically, data was collected so that humans could evaluate it, “Because humans are extremely good at discovering patterns,” Mezić said. “But a modern building might have tens of thousands of sensors delivering data every five minutes, and for a long time, no real large-scale data analysis was going on, so a lot of the data on air-conditioning, heating, etc. were thrown away. In the past twenty years, however, the level of analysis humans once has been replaced by an automated algorithmic layer. Our contribution was developing algorithms to identify the basic signatures of what the building does. It came directly from the Koopman Operator Theory.”

Mezić spent years studying data from a variety of complex sources before moving into data-driven theory. “I felt I could develop interesting new theory only if I understood what interesting new theory was needed,” he explained. “I didn’t want to do theory for theory’s sake, but to solve interesting problems.” Now, years later, he said, “I don’t work on theory or an algorithm unless I have the data and understand what it is asking me to do.”

And he isn’t interested in solutions that apply to only one setting. “I’m looking for methodologies that can be applied to broad swaths of data across different fields. If somebody gives me data from cell biology, I’d like to be able to say something about it with the algorithms I’ve developed, without having to change my thinking too much. I want scalability across different types of systems. That’s what’s really interesting to me.” 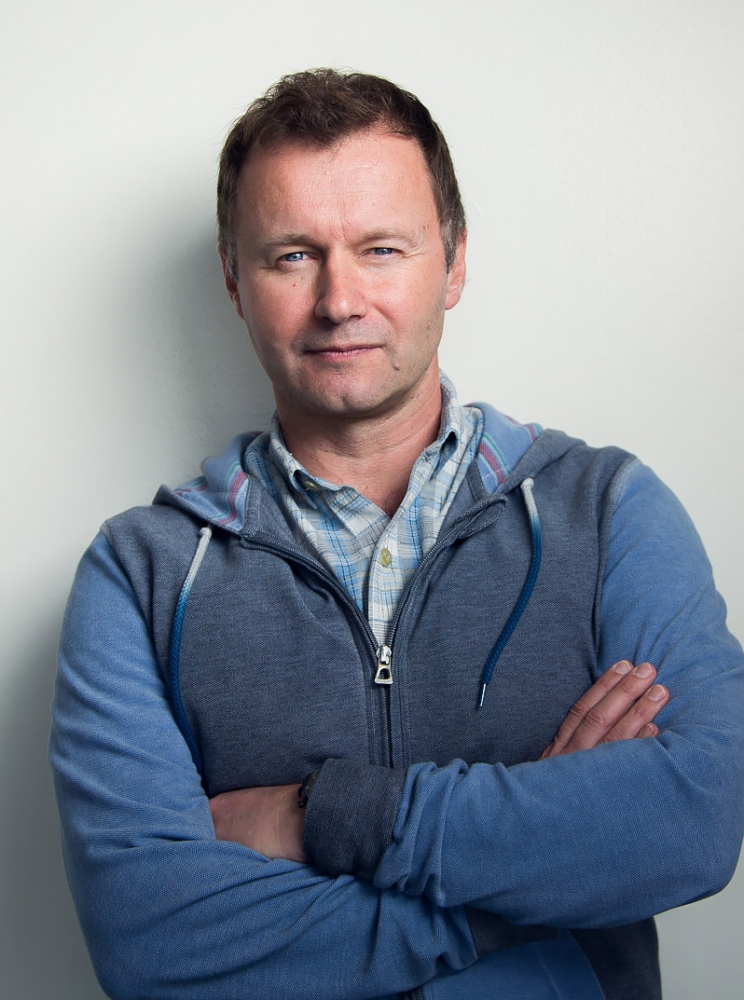 One of Mezić’s major achievements has been learning how to recognize data patterns from a very broad class of what are referred to as nonlinear systems.

Nonlinear systems have no such linear relationship. A heavy bag of coins on a table would require more than 1 unit of force — and maybe more than 2 or 3 units — to move at all. The relationship is not linear.

Extracting patterns in data from linear systems was understood some time ago; the challenge was to do the same for nonlinear systems. “Fifteen years ago, I figured out a way to treat systems that have very nonlinear responses, in the same way as the ones that have proportional responses — so that’s technically my contribution,” Mezić notes.

Since then, his approach has been applied in many settings, both by his students, postdocs and collaborators, as well as by other groups around the world. Researchers in Seattle have used the extension of the theory to understand wave patterns in the brains of people who have seizures. “The brain is another complex system in which we have a lot of different waves propagating through, so it looks very noisy. It’s hard to see the wave, or if it really is a wave,” he explained. “The framework enabled doctors to see those patterns and point to the regions of the brain that produce them.”

Infectious diseases, which tend to spread in waves, but chaotically, are another area where Mezić’s work has been applied, and he has also collaborated with teams in Japan on a power-grid study aimed at determining, purely from data, whether a system would become unstable and experience a blackout.

Fluid dynamics is another area of broad application, from oceanic scales to the micro scale. After the Deepwater Horizon oil spill in the Gulf of Mexico in 2010, Mezić collaborated with marine scientists, including David Valentine, professor in the UCSB Department of Ecology, Evolution and Marine Science, to publish papers describing the use of algorithms to identify the spread of oil in the marine environment. Those techniques became useful again after the Refugio Oil Spill, northwest of Santa Barbara, in May 2015. He has also worked extensively on optimal ways to mix fluids, which is important in a variety of fields, from mixing paint to mixing fuels and lubricants in jet engines, to challenging medical applications in which fluids must be mixed effectively in microscale devices.

Mezić’s work is also applied increasingly in autonomy and control scenarios. “The whole context is, how to do you control an autonomous system to behave as you want it to,” he said. “Historically, in our dynamical-systems work, we were interested only in analyzing — finding out whether a helicopter blade would break or a flu wave would propagate. The control side lies in determining how to control the propagation of the wave.

“We’re interested in those contexts where you have a very large system that looks unwieldy and can seem not to have any patterns until the algorithm extracts them, making the system susceptible to control mechanisms — maybe an optimal way of quarantining to prevent the flu from spreading or energy-conservation measures to prevent a blackout.”

For the $6.5 million MURI project, Mezić will again develop algorithms. This time they will be applied to understanding, designing, and controlling dynamic systems that have a significantly higher level of complexity than anything he and his research partners have tackled to date. With autonomous systems increasing, the U.S. Army is interested in new theoretical approaches that can ultimately be applied to design advanced, autonomous robots, helicopters, and, perhaps, other autonomous systems. Mezić and collaborators will be thinking about fundamental aspects of motion for revolutionary flying vehicles, perhaps with flexible wings more like a bird’s, or robots that can have sophisticated abilities to maintain or regain equilibrium.

“There is currently no unified framework within which we can analyze and control such vehicles so that the calculations are fast, the precision is there, and we can predict such things as when maintenance will be needed,” he explained. “My work is not to produce those applications, but to produce algorithms that can make those kinds of things safer and enable us to control certain processes so that they can operate autonomously.”

While engineers know a great deal about fixed-wing planes through decades of trials and experimentation, Mezić describes it as “patchy knowledge.”

“We know how to calculate certain things, and there are other things we do through serious engineering work. We sit down and measure the system, and it’s one at a time,” he said. “Here’s the system, here’s how it will behave, here are the specs; now produce it, fly — finished. But because flight theory has been tied mainly to fixed-wing aircraft for so long, we don’t have a lot of the theory for flight with flexible wings. With Professor Paolo Luzzatto-Fegiz, my colleague in the Mechanical Engineering Department, and colleagues at Caltech, the University of Washington, and MIT, we want to develop the underlying theory for these systems based on a revolutionary extension of our earlier algorithmic work.”

On the robotics side, Mezić will work with robotics expert Professor Shai Revzen at the University of Michigan, who is interested in applying algorithms to create robots that can better emulate human and animal motion and the ability to maintain and regain equilibrium. The human walk is extremely hard to replicate in a robot, because while humans walk in a rhythmic way based on a repeating cycle, no two cycles are exactly the same, as they involve constant subtle adjustments to maintain equilibrium.

“The true frontier at this point is, How does the system adapt?” Mezić said. He gave the example of how the different rotors on a drone will adapt to maintain equilibrium and control when it is hit by a gust of wind. Or how a robot will stay upright if it is bumped or it encounters a hole or a slippery surface. “Eagles and humans — actually most animals — do this phenomenally well. Robots can do it, but they fail frequently,” Mezić noted.

“The grand goal is to provide the underlying algorithm that can enable people to develop revolutionary autonomous technologies,” Mezić said. “We’re certainly aiming for that.”