Friday, May 19, 2017
On first glance, Botryllus schlosseri may appear to lack star power. The small, transparent marine organism, abundant along California’s coast, spends its life colonizing submerged surfaces — boats, docks, and even other animals. But Botryllus is more than just a humble hanger-on; as an invertebrate closely related to humans, it has characteristics that are about to make it the focus of a multi-campus research project aimed at placing the University of California at the forefront of vascular mechanics and, by extension, cardiovascular disease, which is responsible for one in four deaths in the state.

UC recently awarded Megan Valentine (above), associate professor in the Department of Mechanical Engineering, and partners at two other UC campuses — Los Angeles and Irvine — with $300,000 for a pilot project as part of the UC Multi-Campus Research Programs and Initiatives (MRPI). The awards provide two years of seed funding for collaborations that show promise in terms of launching pioneering cross-disciplinary research, strengthening UC’s position as a leading public research university, supporting innovative graduate student research, informing public policy, and benefitting California residents.Valentine and her key UCSB collaborator, Tony De Tomaso (below right), associate professor in the Department of Molecular, Cellular, and Developmental Biology, and colleagues at UCLA and UCI will focus their research on Botryllus schlosseri’s vascular mechanics and mechanobiology. The latter is an emerging field of science focused on how physical forces and changes in the mechanical properties of cells and tissues contribute to development, cell differentiation, physiology, and disease.

“This is a really strong area for UC and something we have a lot of pride of ownership in, but the campuses could be better linked,” Valentine said. “These interdisciplinary initiatives from the UC Office of the President play an important role in cultivating relationships within and across campuses. We’re very grateful for this opportunity to leverage system-wide resources and expertise.”

The project focuses specifically on the vascular mechanics of Botryllus schlosseri, which, despite the invertebrate's close evolutionary relationship to humans, has not been studied previously in this context. “A lot of the discoveries we’ve made in terms of what proteins are important for vasculature in humans appear also to be relevant in this model,” Valentine said. “It has completely untapped potential for discovery.” 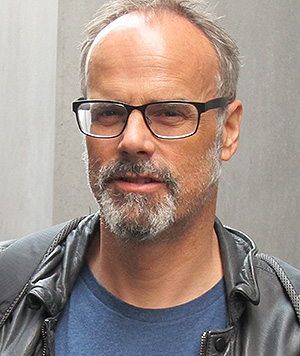 De Tomaso added, “The biology of Botryllus is fascinating and allows novel approaches in a number of fields, from immunology to stem cell biology and regeneration. However, this new project on vascular biology is potentially groundbreaking, as it joins the unique anatomy and accessibility of the blood vessels to powerful visualization techniques. That allows us to directly manipulate and characterize global responses at a resolution not available in other model organisms.”

Botryllus has a simple but unique anatomy, with the vasculature located on the outside of the animal. When it is treated with a drug that disrupts collagen crosslinking — another of its valuable characteristics is that it responds to drugs that humans also respond to — it retracts the vascular structure in a process clearly visible through an optical microscope, and even to the naked eye.

“So we get this immediate visual readout from a live organism,” Valentine explained. “We can go in and manipulate the vessels: stretch them or apply forces with the goal of understanding what’s happening mechanically. The drug does not affect the blood vessels directly; it affects the matrix in which they sit, softening it. And when the vasculature receives that softening signal, it retracts. We want to dig into the details of how organisms sense force and how they receive and process mechanical signals and turn that information into other cell functions — that’s not something that we understand. Then we need to connect that to the broader context of human vascular biology.”

The long-term goal is to use the pilot project to establish an infrastructure, and then to secure longer-term funding and form a consortium of biologists and engineers to investigate how blood vessels know when to grow and shrink, and how to control those decisions to fight human diseases such as cardiovascular disease, macular degeneration, and cancer.Another aspect of the project is to expand understanding of the role of phagocytes, cells that protect an organism by ingesting harmful foreign entities and cells and tissues that are no longer needed. “In this case, as those vessels are retreating and you’re losing all the blood vessel volume, those cells have to go somewhere, and phagocytes play a role in destroying them,” Valentine explained. “There are a lot of open questions about exactly how that works. And because the vasculature is on the outside in this system, we have a lot of opportunities for imaging and for other analysis, so maybe we can get to the heart of that question.” Student training is another key component of the MRPI Awards, and UCSB undergraduate and graduate students who are trained in engineering will have the opportunity to work with colleagues at UCI and UCLA who have expertise in such areas as conventional animal model studies, as well as conducting human clinical trials

De Tomaso noted that undergraduate students in a new class for summer 2016 will spend three weeks doing discovery-based research at UCSB and three weeks learning bioinformatics at UCLA. “The coolest thing about this system is that it is so accessible; you can touch the blood vessels with your fingers,” De Tomaso said. And because the retraction of the vasculature also occurs quickly, taking only 16 hours, he added, “Students can rapidly learn many experimental processes. There is so much low-hanging fruit experimentally that they will actually be able to do brand-new science.”MRPI projects build connections among UC campuses while taking advantage of specific characteristics unique to each one. “In Santa Barbara, because of our location, we understand ocean resources and what we can learn from studying ocean organisms,” Valentine said. “It will be powerful if we can share our ocean experience with the other campuses that don’t have those resources. In a ten-campus system, you don’t need every campus to have expertise in every area. We should be specialized, but then we should also recognize that as part of the UC system, we can leverage all of the other campuses in really unique ways.” 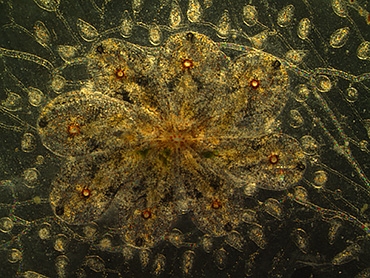 A light micrograph shows individuals of a Botryllus schlosseri colony that have arranged themselves into a star-shaped structure called a "system." A colony can consist of multiple systems, all connected by a large common external vasculature. Here, the vasculature can be seen extending out at the edge of the colony and terminating in sac-like appendages called ampullae. Photograph by Delany Rodriguez